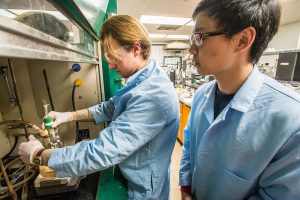 Methanol fuel cells are used in a variety of applications. But the cleaner, renewable technology has its limitations, mostly owing to efficiency. And its efficiency is closely related to the type of material used in its membrane, which makes the cell work.

Ideally, this material must separate reactants and transport protons while also acting as an insulator.

Sound like an almost magical material? Well, it’s not easy to make. But researchers at Southern Illinois University Carbondale are trying to figure it all out.

Orion Fiorino-Matthews, a freshman in chemistry, and Weifan Sang, a doctoral student in chemistry, are working on materials that will help direct methanol fuel cells be more efficient. DMFCs are a subcategory of proton-exchange fuel cells. Both use methanol, which is energy-dense but fairly stable liquid under all conditions, making it easy to transport.

Although they are capable of storing a large amount of energy in a small space, current DMFCs have a limited ability to produce much power. This means they are ill-suited for powering large vehicles, but ideal for smaller vehicles such as forklifts and tuggers, as well as consumer goods such as mobile phones or laptops.

The military also is interested in them, because of their low noise and thermal signatures and lack of toxicity.

But these fuel cells are not very efficient, so creating technology that would improve their efficiency would play a key role in the theoretical use of methanol as a general energy transport medium. Such breakthroughs could open the door to better, cleaner energy, such as that envisioned a methanol economy.

A key aspect of improving efficiency lies in the proton-exchange membrane, which is designed to conduct protons while acting as an electronic insulator and reactant barrier. These critical functions are what make the fuel cell tick.

Working under Yong Gao, associate professor of chemistry and biochemistry, Sang and Fiorino-Matthews are attempting to develop methods for producing polybenzimidazole membranes, which could improve these functions.

The task is challenging, as polybenzimidazole does not behave like other polymers, meaning researchers must come up with new productions methods.

Fiorino-Matthews assists Sang in the laboratory, where he runs experiments aimed at finding these new techniques to produce the membranes.

The first step in a long journey

At SIU, involving undergraduate students in top research is a priority. Fiorino-Matthews said he believes it will help him eventually get job conducting his own research into topics he finds compelling.

“It means a lot to me to be able to volunteer and actually provide some meaningful assistance in a research field I find interesting,” Fiorino-Matthews said. “I hope to continue to research a variety of topics because I find many things interesting and there are so many different things I want to learn about. This has provided me my first step into research.”