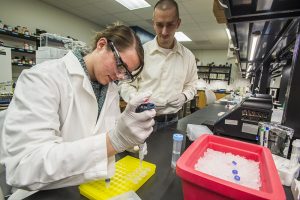 Few events strike terror into the human heart like the thought of a bite from a venomous snake. But a student researcher at Southern Illinois University Carbondale is working on ways to produce antidotes faster and more affordably.

Helen Mihm, a senior in chemistry from Crystal Lake, is working with a researcher at the SIU School of Medicine on finding the right synthetic molecules that readily bind to and mitigate the deadly cocktail of toxins present in different snake venoms. She is working with venom from the Eastern Diamondback rattlesnake and Western Diamondback rattlesnake, as well that from the Egyptian cobra.

“I have always had an interest in venomous creatures and poisonous plants but really had not had a reason to think out a project of my own,” Mihm said.

Mihm initially wanted to work on traditional methods of creating anti-venom, a delicate, time-consuming and expensive process that involves injecting animals with small amounts of venom and then collecting the anti-bodies they produce to combat the toxins. But when she began working in the lab of Keith Gagnon, assistant professor of biochemistry and molecular biology, she learned about the potential of aptamers, synthetic, single-strand pieces of DNA that bind with a high affinity and specificity to certain molecules.

“Keith had mentioned that it might be possible to use aptamers as an anti-venom and sure enough I found a few papers on research for just that,” she said.  “Needless to say, I got very excited.”

With Gagnon’s encouragement, Mihm applied for and won a REACH grant to fund her research project. REACH, which stands for Research Enriched Academic Challenge, is a staple of SIU’s strong commitment to involving undergraduates in cutting-edge research.

Trying to find the right ‘family’

The few researchers looking into using aptamers in an anti-venom role do so in conjunction with breaking down the toxic mixture that comprises venom into individual toxins before trying to match each of them with the appropriate aptamers. Mihm and Gagnon’s approach instead involves leaving the venom intact while finding the correct “family” of aptamers all at once.

“We are hoping to discover several things with this,” she said. “A better anti-venom option is one of them but also a better understanding of both the venoms and the aptamers.”

The snake venoms they are working with were chosen for their varying means of attacking the victim’s body. The two rattlesnake species use hemotoxin, which prevents blood clotting and causes blood vessels to disintegrate, essentially causing the victim to bleed to death. The cobra venom attacks the nervous system, causing dizziness, nausea, convulsions and paralysis leading to suffocation.

“The idea is to compare the aptamers that bind each of the rattlesnake venoms first and look for similarities,” Mihm said. “Next we want to compare the cobra venom aptamers.  If we see similar aptamers here as well we will want to look at the toxins and see if we can detect a key binding site that the aptamers are attaching to.

“Solving this puzzle could help develop anti-venom treatments for other snakes,” she said.

Undergrad research a priority at SIU

Getting the REACH grant and being involved with such research as an undergraduate has given Mihm a head start in gaining practical, hands-on experience in the lab, as well as developing her communication skills, she said. But it’s only a start for her.

“Eventually I plan on using the understanding of how the toxins in venom work that I gain from this work to study how those toxins can be applied for medicinal purposes.” She said. “This is an expanding field and several very good medications have been developed from snake venom already.”