Revamped bicycle lanes and markings along nearly two miles of a primary road at Southern Illinois University Carbondale will provide greater visibility, understanding and safety for bicyclists and motorists.

Project is based upon national traffic standards

“The university had some bike lanes but they were worn,” Dillard said. “We feel like this significantly increases the safety of being able to bike. There are places on campus that have some bike lanes that didn’t have them before. It brings some organization.”

There are just over 1,100 bikes registered with DPS with a current bike decal. Bike decals are free, but bicycles parked on campus are required to be registered either by SIU or the city of Carbondale.

Green fees, a student-led initiative that collects about $10 per semester, along with parking division funds, were used to pay for the project, Dillard said. The revamped bike lanes and signage are also cohesive with ongoing bike-related projects underway in Carbondale, making the transition seamless.

Shawn Bond, an architect with the Physical Plant’s Engineering Services, said PSO crews quickly worked to paint the new markings at times when there was less traffic prior to the start of the fall 2018 semester, which starts Monday.

Bond said the bike lanes vary from four to five feet in width. A benefit of reducing vehicle lane width to accommodate bike lanes is that motor vehicle traffic should slow down to the marked 20 mph speed limit.

Dillard noted the amount of study and effort Bond put into the project to ensure the project meets national standards.

There are four primary markings for motorists and bicyclists to be aware of. 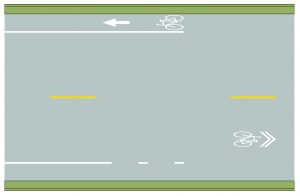 Keith McQuarrie and his wife, Sandy Semrow, routinely bicycle from their home in rural Carbondale into town and around campus. The markings will require education by both motorists and bicyclists but the signage is an upgrade, McQuarrie said.

“This delineates where the bike lanes are. They are a little wider than they were, and I think that’s good,” said McQuarrie, who worked for the university for 25 years, including time with admissions and records and as chief academic adviser with the College of Applied Sciences and Arts.

“Hopefully cyclists will take advantage and motorists understand that cyclists have a right to be there,” he said.

Semrow, who bicycles about 6,000 miles a year, including in below-zero temperatures, said the new markings are “wonderful.”

There are some areas where there is a dedicated lane but motorists are also now able to see the markings and realize the road is for cyclists as well.

“I think this is going to help tremendously,” she said. “This is a win-win for the cyclists and drivers. It’s going to bring a little more open acceptance of a shared road.”

Bicyclists advised to use bike lanes, follow all traffic rules

“Bicyclists should use the bike lanes instead of the sidewalk where the new lanes have been installed,” Benjamin Newman, the university’s public safety director, said. “Bike lanes were added to support the safe travel of cyclists on campus.”

There have been 25 bicycle accidents since 2016 reported to DPS, with 11 of those involving vehicles and crosswalks, including several where bicyclists rode through crosswalks and hit the vehicle. Bicyclists should walk their bicycles through designated crosswalk areas.