Technically, that’s true. The canoe she and her boat mates, Justin Gunzel and Jordan Hughes, were in was still somehow managing to stay “afloat” on Little Grassy Lake despite the fact that it was literally completely under water. 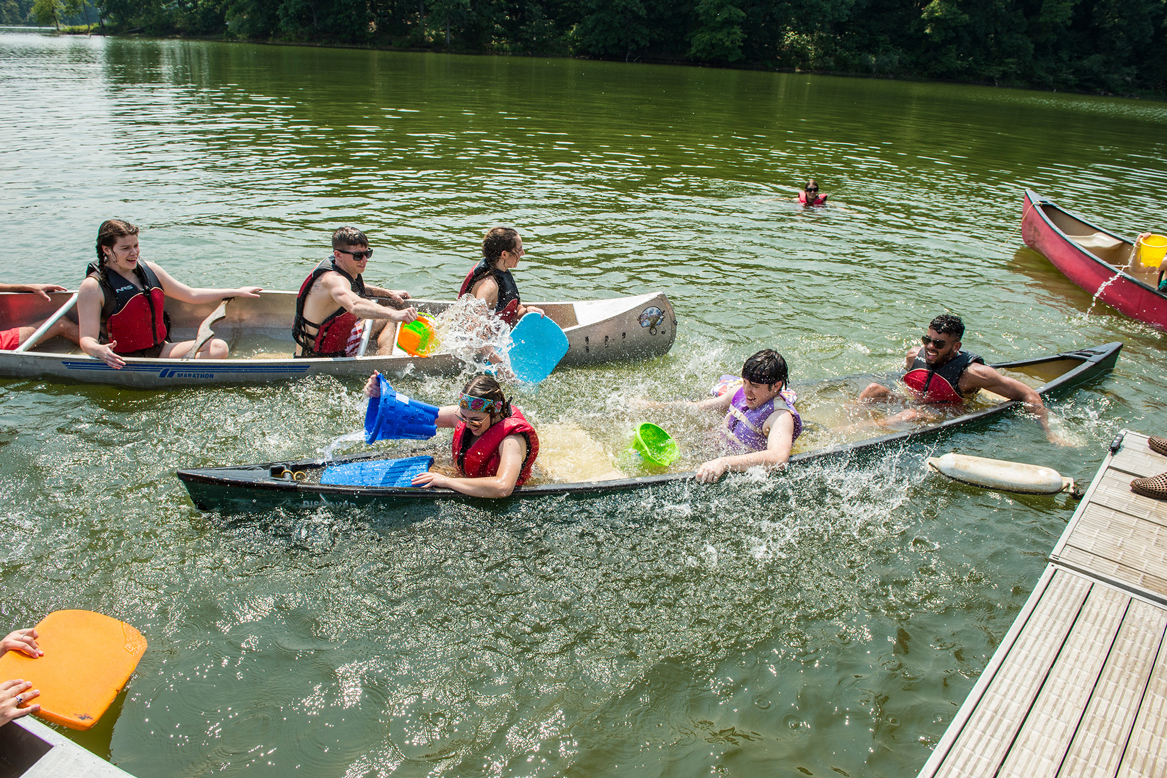 It had been a fierce battle. Salukis aboard each canoe used foam kickboards to paddle around the docks as they dipped buckets into the lake and tossed water at the other watercrafts, hoping to fill and sink them to win the competition. Maneuvering so you could be close enough to add water to another canoe while keeping water out of yours, since no bailing was allowed, was quite tricky.

Bystanders at Southern Illinois University Carbondale’s Dawg Days new student retreat commented that if the Nolte’s trio is even half as determined and tenacious when it comes to their college careers and lives as they were during the real-life game of Battleship, they’re destined for success.

And fostering success is really what Dawg Days is all about. It’s a four-day, three-night retreat for new SIU freshmen and transfer students. Located at the university’s Touch of Nature Environmental Center, it’s filled with fun team activities led by returning SIU students.

It’s a chance for new students to get acquainted, learn about SIU, and get some tips to start their SIU days off on the pathway to success.

Gunzel, a senior from Highland Park wrapping up an electrical engineering degree, is a counselor for the camp. It’s his second year doing so.

“It was such a great experience when I came here as a freshman, I wanted to make it really good for other new students.”

Hughes, a freshman criminology major from Dallas, said that Gunzel had accomplished that goal.

“I’ve been having fun, getting in touch with the outdoors and meeting new friends,” Hughes said. “It’s nice that everyone is willing to step outside their comfort zone and do different things and have great experiences here.”

Nolte, a freshman from Bethalto, agreed.

“I’ve already met people in my major (including Hughes) and I’ve made a lot of new friends,” she said. “Everyone is here with a positive attitude and the consensus is, this is great.”

As the game wrapped up and the teams headed toward their next activity, another group approached and the counselor could be heard reassuring one and all, quite tongue-in-cheek, that “There are no piranhas, sharks or alligators in that lake.”

Across camp, Lauren Smarjesse and Theresa “Tessa” Kerouac faced off, armed with padded sticks which they swung at fuzzy balls, during a wild and wooly game of broomball. Both were enjoying the unique introduction to college life. 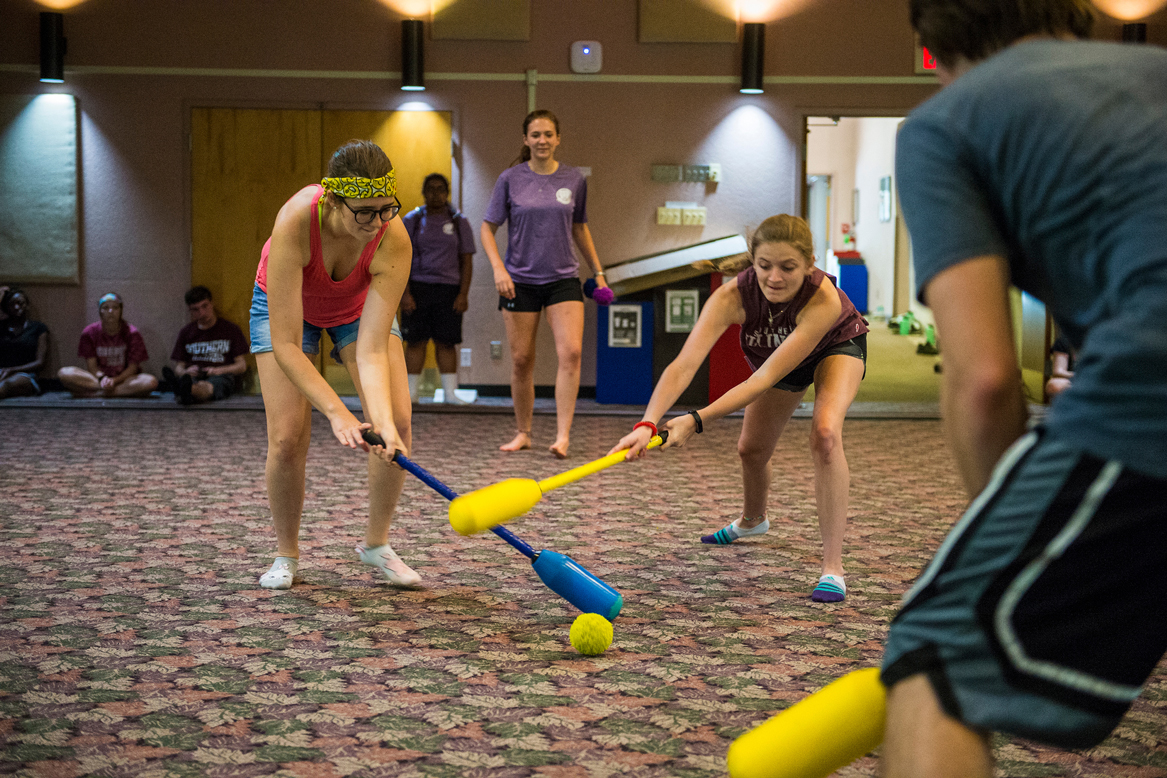 “I’m into outdoor activities so I was really excited to get to come when I heard about Dawg Days,” Kerouac, a freshman aviation flight and technology major from Lake Bluff, Illinois. “I felt like it would be a good head start to being on campus. It’s been really great; I’ve met a lot of people in my major — aviation — and I’ve already learned the fight song and lots of other cool little things. It makes you feel like you’re already part of SIU.”

Smarjesse, a freshman international communications major from Bourbonnais, Illinois, said that she was learning things that she didn’t know about campus, despite having family connections.

“My grandma went here, and she told me about the Shawnee Forest, but I didn’t really know about Touch of Nature until I came here for Dawg Days,” she said. “It’s such a great place, I feel like I’m going to use it a lot. I’ve had a good time and met a lot of new people, too.” 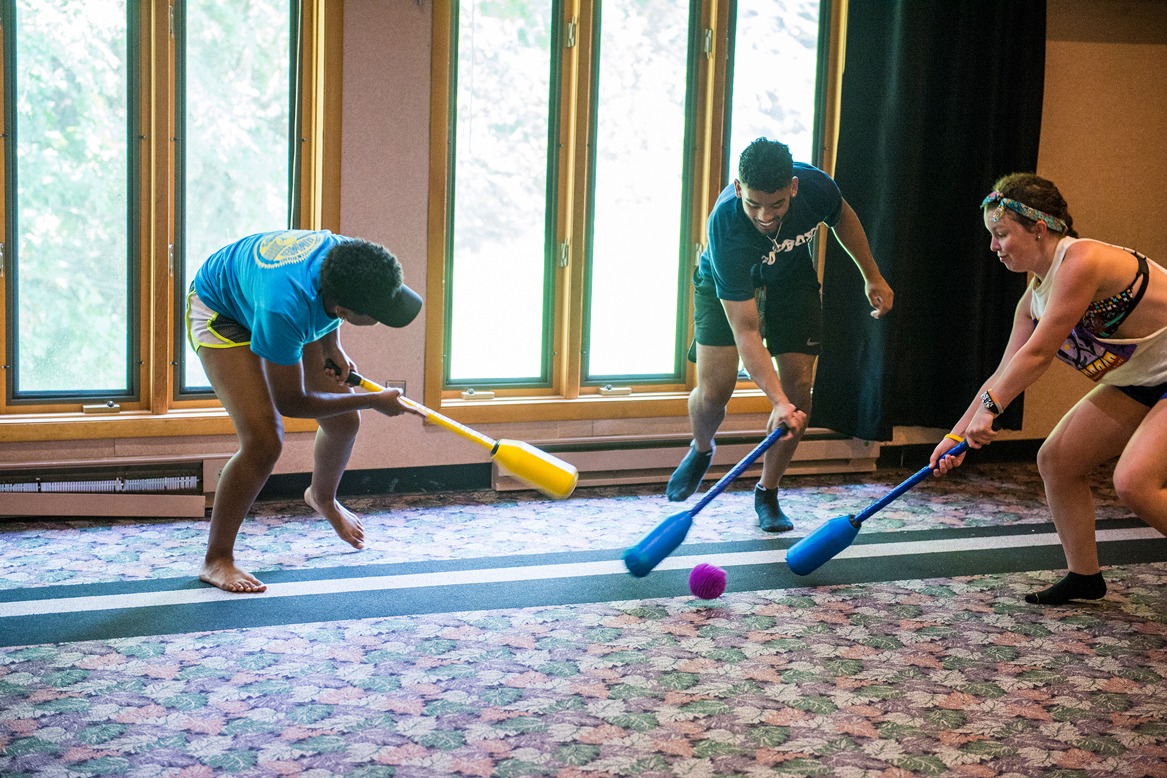 For many participants, Dawg Days offers a ‘first time’ of one type or another.

“This is my first ‘camp experience,’” Morgan Minor, a freshman chemistry/pre-pharmacy major from Rockford, Illinois, said as she rotated out of the game. “I’m not an outdoor person. But it’s been really fun. I’ve been making a lot of new friends; the interaction has been great.”

“I’ve never lived away from home and I don’t really know anybody at the university,” she said. “I came to SIU because they have a great recreational therapy program and I will get to work with special education kids; that’s what I really want to do.”

“But, Dawg Days has been a lot of fun and it’s helped me a lot. I love playing the games — I’m a very competitive person. And I’ve met a lot of people that are going to live at Thompson Point where I’m living. It’s like I’ve already got a support system.”

Teams vie to “Capture the Ball”

It was a hotly contested game of capture the flag — using a ball. Members of team Eagle Knievel were determined to avenge losses suffered at other games. The Seal Team 6 crew was just as determined to assure that didn’t happen. 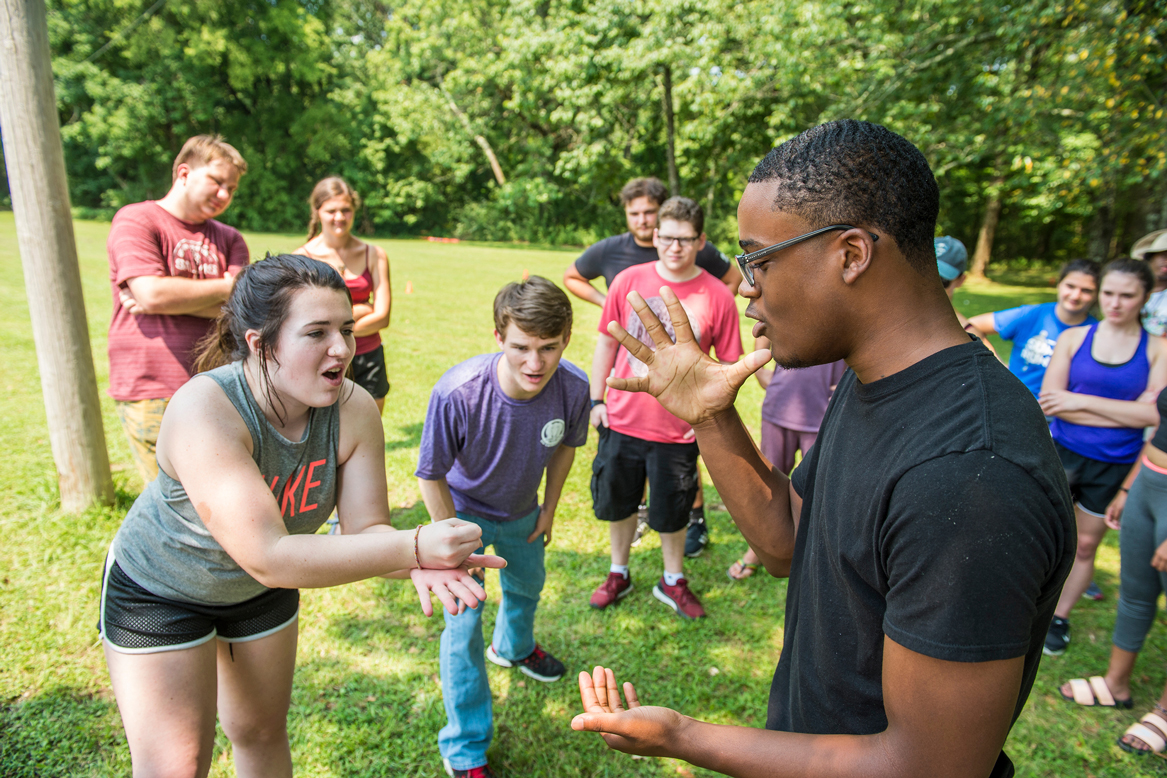 Louder and louder they screamed “Itchy, mini, hoy” as they gestured. Imagine an amped up version of rock, paper, scissors and you’ll get the idea. Sydney Lewis, a freshman biology major from Carbondale and Zachary Carriere, a freshman exploratory student from Chicago, were about to launch the game and counselor Bobby Buechele, a sophomore business major from New Lennox, was officiating.

“It’s really cool we get to meet a lot of people and make friends before school starts. I’ve enjoyed it,” Lewis said during a break in the game.

“Every day there are different things to do,” Carriere added. “The games we’ve played are lot of fun.” 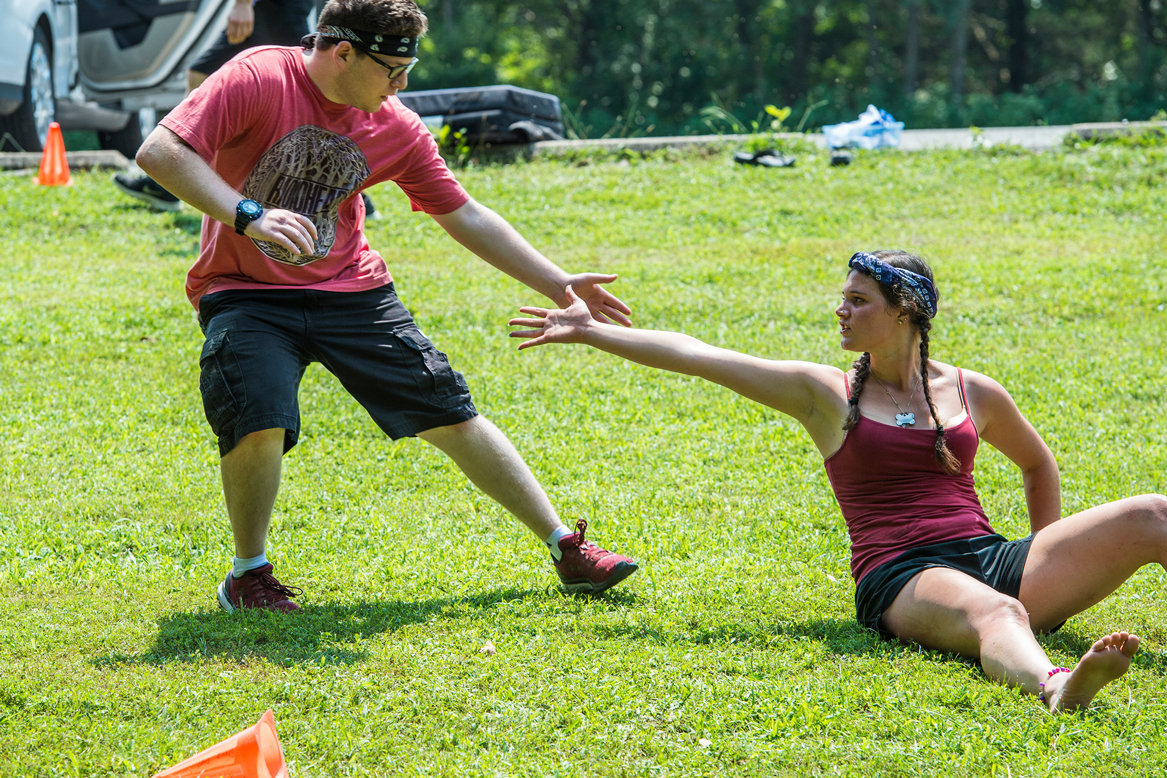 Becca Bernier wasn’t about to let Carriere have an easy escape to “home” with Eagle Knievel’s “flag,” even if it meant an accidental dive into the bushes and a few scratches.

Dawg Days is “nothing like I expected,” but in a good way, according to Bernier, a freshman zoology major from La Grange, Illinois. “It’s a lot of team building and getting to know people. It’s fun.”

Andrew Cramin, of Northbrook, Illinois, managed to tag teammate Becca to get her back in the game and the freshman exploratory student considering a career in broadcasting said it’s been a “great camp experience. I love being outdoors and meeting all these new people. The food’s pretty good and it’s been great fun.” 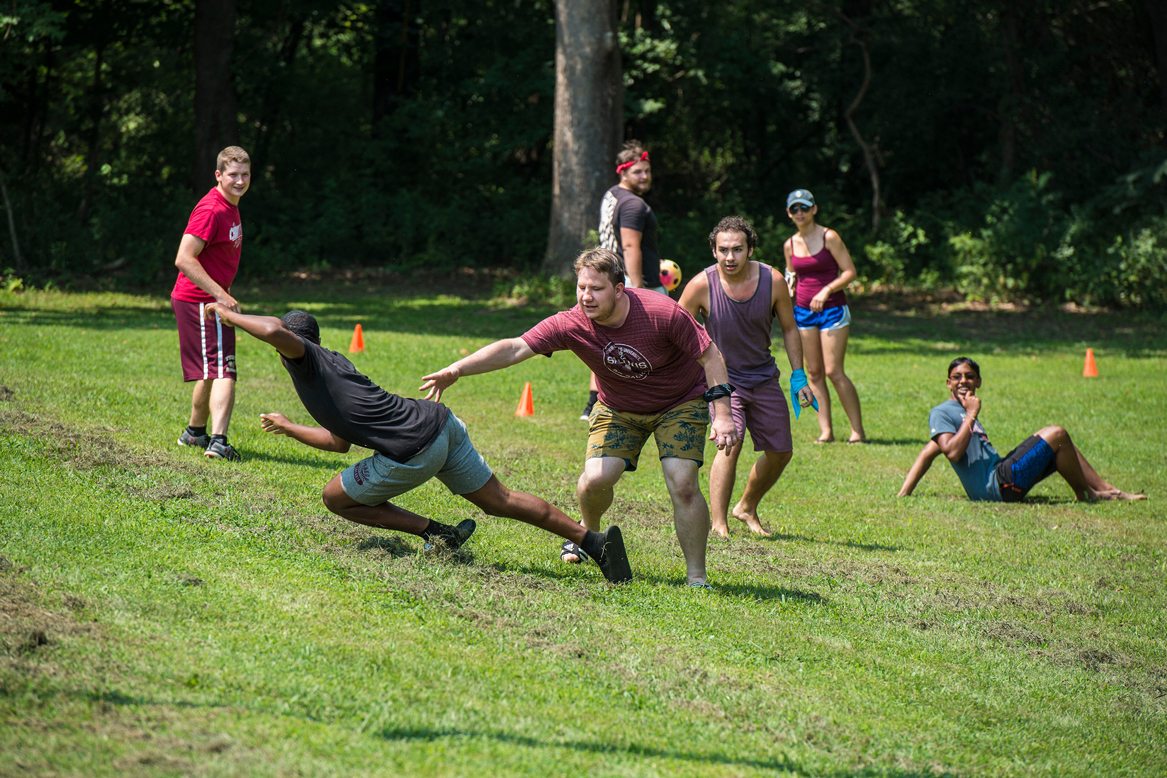 “I came because I thought it would be fun, and I’ve really enjoyed it. It’s a great social opportunity,” Turner said. Like many of the participants, he proclaimed Battleship one of his favorite activities, even if his boat sunk pretty quickly.

“We had a lot of larger guys, and we lost pretty quickly because we got too much weight on one side and sunk ourselves,” he laughed. 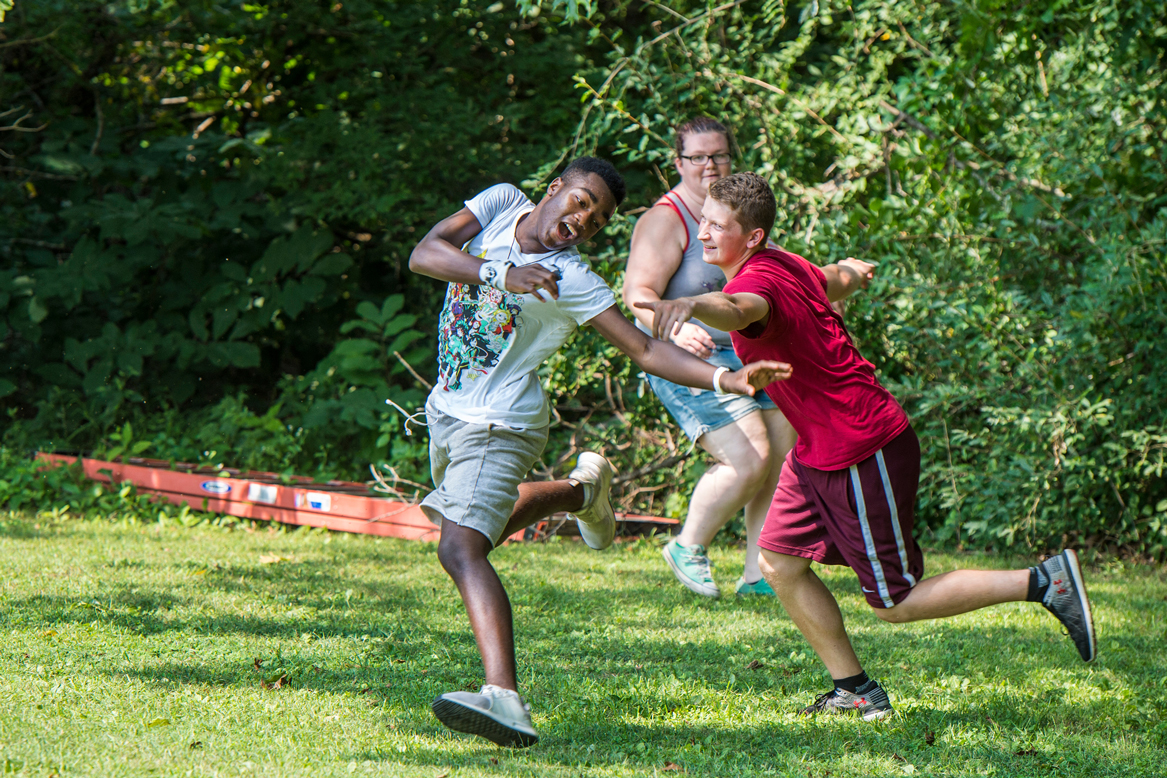 Jase Woolfolk and Cason Slaney were all smiles as they got in on the action.

Woolfolk, a freshman from Manhattan, New York, was enjoying the great outdoors, new friendships and all of the games. His favorite?

“Capture the Flag,” he said as he sprinted across the field.

Slaney, of Cincinatti, is a freshman and chose to come to SIU because of the highly acclaimed aviation program. He also secured a university excellence scholarship and is looking forward to starting classes. In the meantime, he thought Dawg Days offered a good chance to get to meet people since he is from out-of-state and didn’t known anyone on campus.

“I’ve made a lot of friends already and I like that it’s active,” he said. “There are no lectures here.”

As Buechele cheered on team Eagle Knievel, he said he wouldn’t have missed the opportunity to be a part of Dawg Days again.

“This experience changes everyone who comes here; it changes them for the better,” he said. He and the other student leaders talked while training to lead the camp and “about every one said that they met the person who is their best friend at college here, during Dawg Days. If you come and participate, it will change you for the better.”

In addition to games, water fun and other traditional camp activities, the 117 participants got to visit with SIU staff and administrators, and even enjoyed a motivational pep talk from Jerry Kill, special assistant to Chancellor Carlo Montemagno and SIU athletics program manager.

Evenings were filled with special events as well, including an ice cream social, an outdoors dance, a pajamas movie night, and the very popular Egyptian Fest, where costumes were encouraged, according to JD Tanner, director of Touch of Nature.